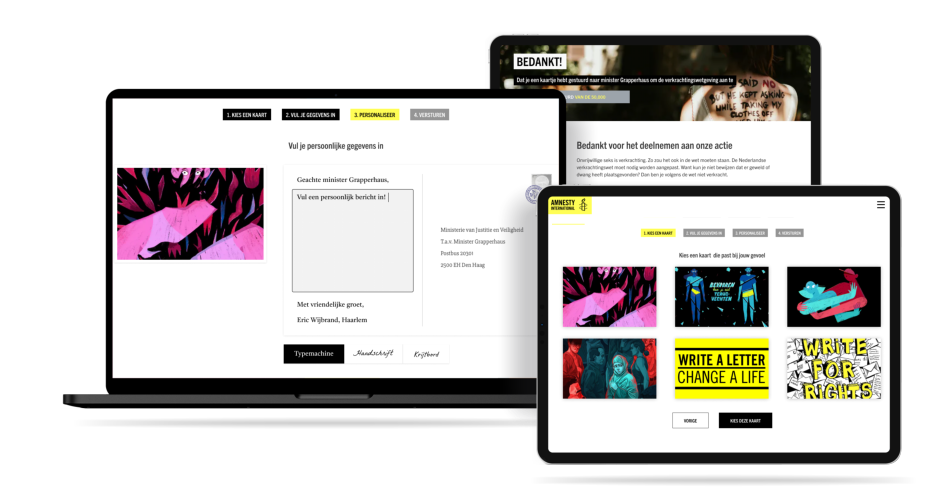 Since the start of our partnership, the campaign platform amnesty.nl has grown every year and has contributed to the main goals of Amnesty International. Based on our NGO suite, we have already developed a range of possibilities that Amnesty can use to develop and launch well-functioning and user-friendly campaigns - in a short period of time. For each campaign, Amnesty chooses the campaign format that best suits the target or momentum in question. With the NGO suite’s scalable system, campaigns and petitions can be directly linked to flexible forms to maximize conversion.

a postcard for grapperhaus

With the addition of the “Card Tool” and the “Wall of YES”, our partner has added two more powerful online campaign forms in their fight for an amendment to the rape law in the Netherlands. The Card Tool enables site visitors to conduct an online campaign by having a postcard sent to Minister Grapperhaus. The card is compiled online in a few simple steps and Amnesty then ensures (largely automatically) that the protest cards are physically sent.

The “Wall of YES” is a mechanism we developed to empower the Let’s talk about YES campaign. It is a great success: in the first week after launch, more than 40,000 people contributed to the wall. An interesting difference from the usual petition form is that signers actually participate visually: on the campaign page you can see the wall growing with each new participant. Because many people share their photo, the campaign literally gets a face compared to regular petition campaigns.

justice for the Uighurs

With the ‘avondje gerechtigheid’ concept, Amnesty wants to draw attention to human rights in specific countries by selling meal boxes. In addition to ingredients and recipes, a box also contains information about human rights themes from the country in question. The aim is to create awareness and recruit new activists among the millennial target group. Us Media supported Amnesty as a technical partner by ensuring that all data flows are working behind the scenes, such as handling the order form, payments and the link with De Krat as the supplier of the boxes.

Amnesty’s platform runs entirely in the Amazon cloud (AWS). By cleverly caching and optimally serving images (see imgix), the website has become extremely fast, without making any concessions in terms of image and layout. The entire setup is scalable so that the site continues to perform well during campaigns.

For the wall of YES, we used imgix to combine the campaign graphics with photos of the signers. Imgix makes combinations very quickly and ensures that the most optimal image in terms of compression and size is always served, which benefits the speed. In addition, the service automatically provides the crops with smart facial recognition algorithms.

The basis for the CMS is WordPress, which we made suitable for running quickly, securely and scalable from the Amazon AWS cloud. Not something WordPress can handle well by default. The images come from the imgix CDN and the other assets directly from the AWS CDN.

The addition of these new campaign options to Amnesty’s toolbox confirms once again that solution-oriented collaboration as partners produces the very best results (and a lot of job satisfaction). The Card Tool has been deployed successfully. The YES wall can be called a success: already more than 40,000 participants and counting.